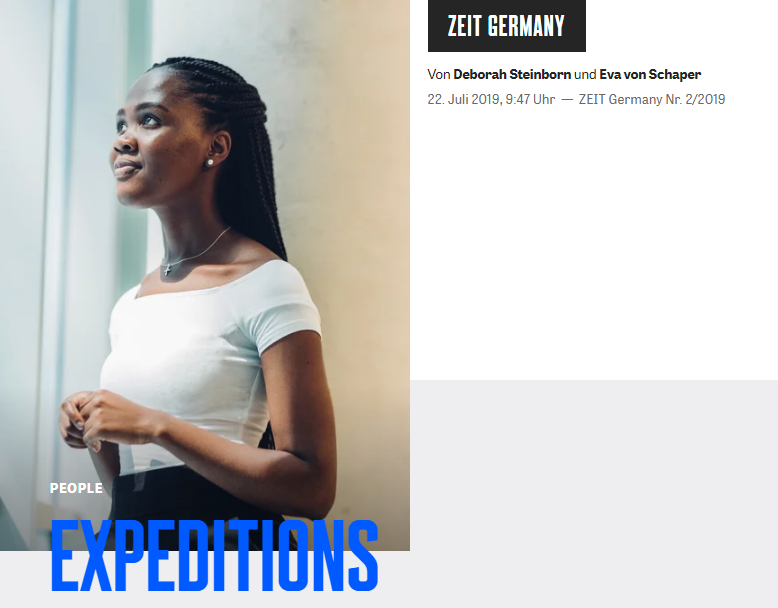 A doctoral student finds her path in chemistry at a private university in northern Germany. Outside the lab, she’s fighting for better education for young girls on both continents

Link to ZEIT Campus: FROM BULAWAYO TO BREMEN 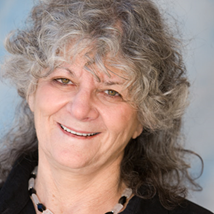 Link to Jacobs press release: Recycling Of Rare Earth Elements; Student Of Jacobs University Bremen Made It To The Finals Of ‘Jugend Forscht’, The German Youth Science Competition

To make it to the final was his goal. “I’m really happy that it worked out,” says Jan Felix Schuster. The 19-year-old qualified for the national finals of the youth competition ‘Jugend forscht’ in Chemnitz from 16 to 19 May. He is the state champion of Bremen in the field of chemistry, and participating is more important than winning for him. “Getting to know the other projects and making new contacts is what I enjoy most about ‘Jugend forscht‘”.

Medicine? Yes! Engineering? Yes! But chemistry? Better not. “When people in Zimbabwe say that they want to study chemistry, most people ask: ‘What will you do with it?’ “, tells Lisa Tichagwa. “They normally suggest other subjects.” The 21-year-old nevertheless decided to study chemistry at Jacobs University Bremen. Now she has been awarded the August Wilhelm von Hofmann scholarship of the German Chemical Society (GDCh) for her outstanding academic achievements – and she feels satisfied with her choice. “The scholarship shows me that I made the right decision.” 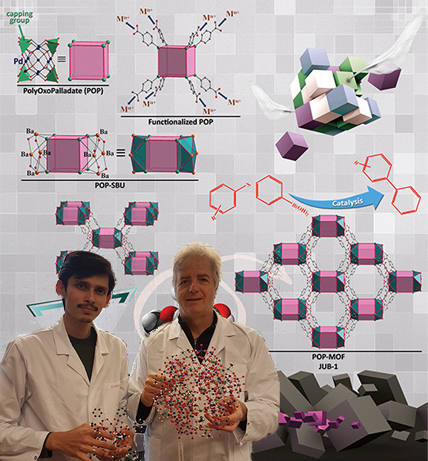 It is stable and recyclable: a team of scientists from Jacobs University led by Ulrich Kortz, Professor of Chemistry, has developed a new class of materials in close cooperation with researchers from the Carl von Ossietzky University of Oldenburg and the Technical University of Munich. The compound based on the precious metal palladium paves the way for the full use of the entire class of discrete polyoxopalladates (POPs) as building blocks for 3D framework materials (MOFs). The project was funded by the German Research Foundation (DFG). The name of the new class of materials: POP-MOF, JUB-1. 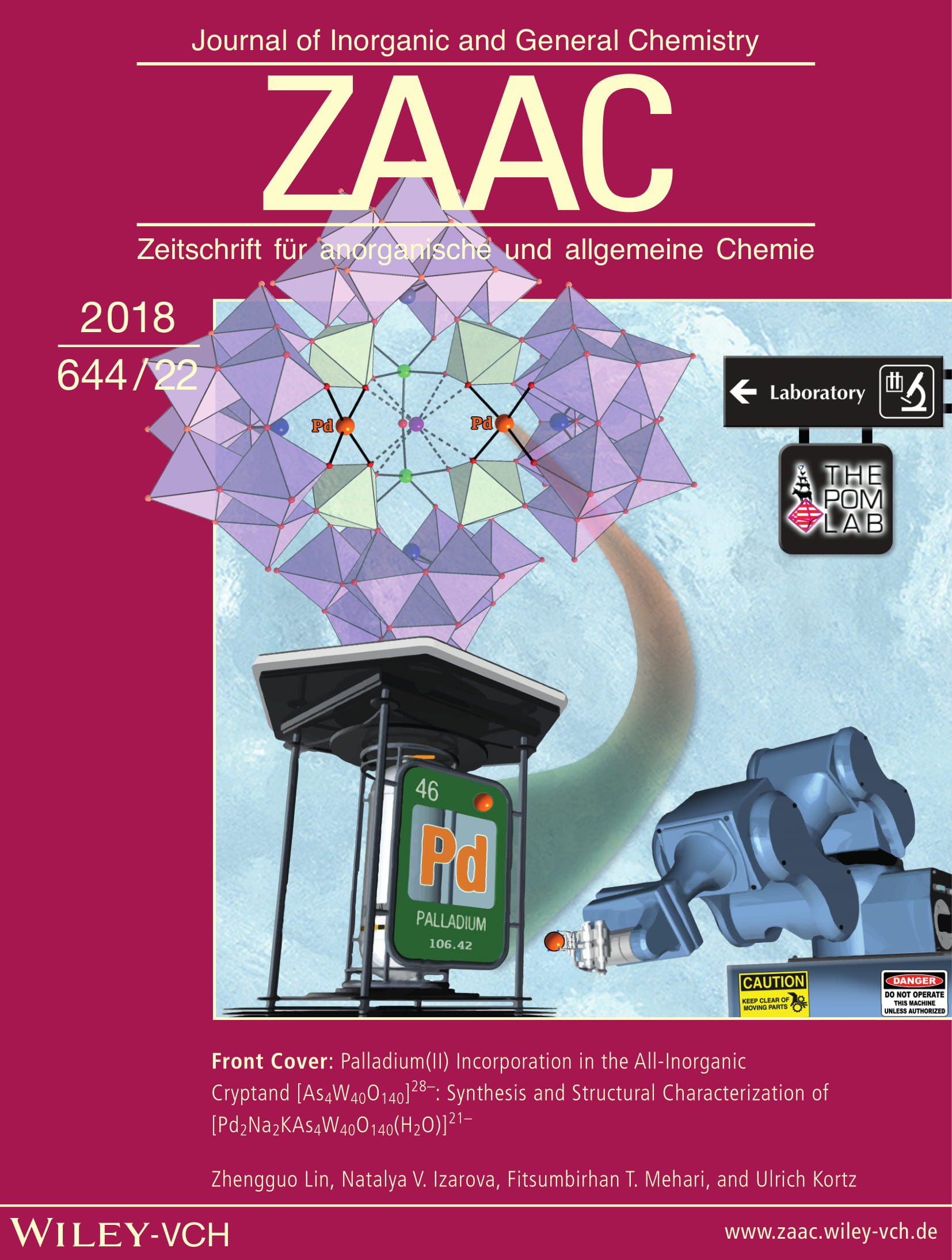 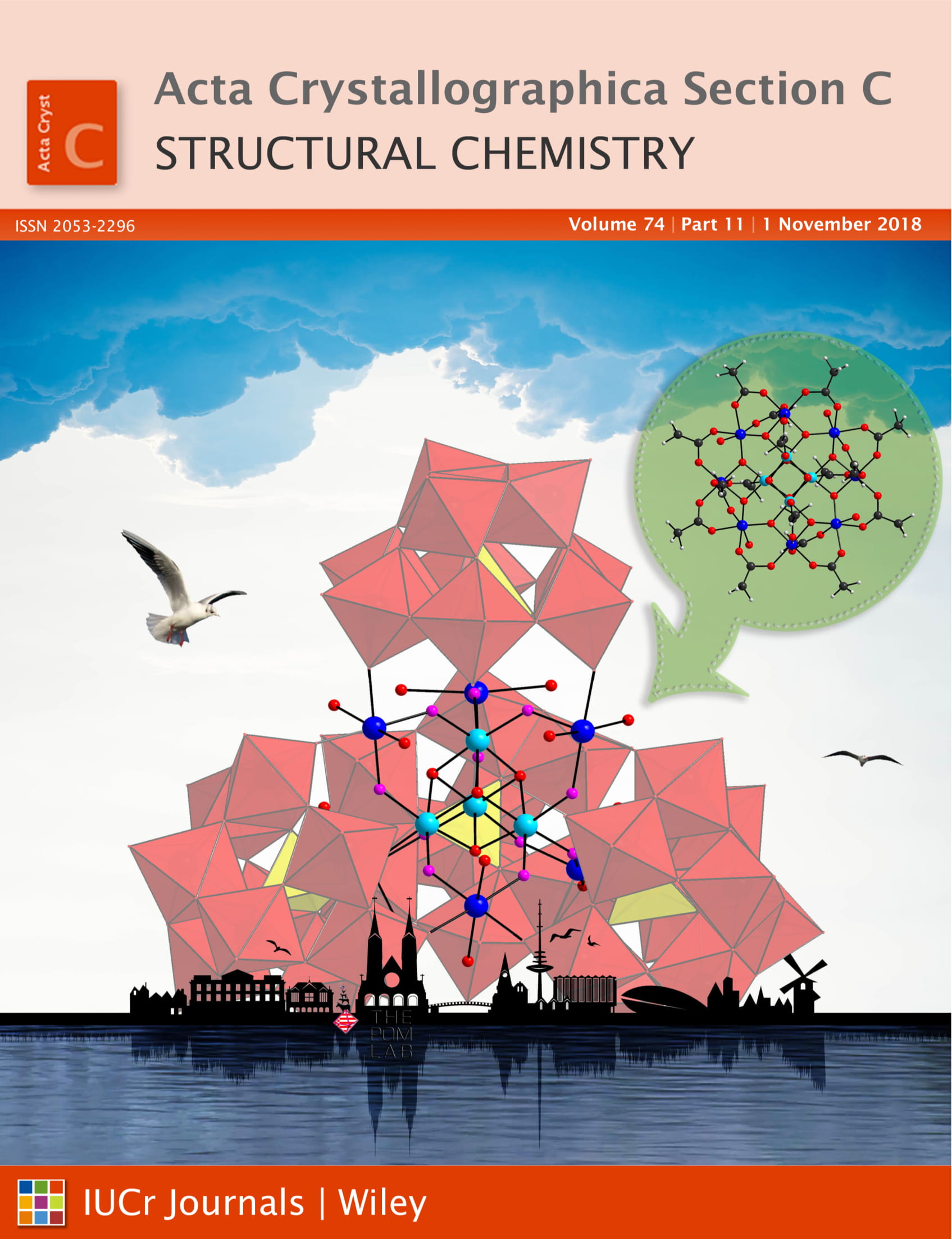 The development of polyoxometalate (POM) chemistry during the last half-century or so has benefitted tremendously from single-crystal X-ray diffraction. Besides structural aspects, the study of the physicochemical properties of POMs has developed tremendously in recent decades. The multitude of attractive properties includes controllable size, composition, charge density, redox potential, acid strength, high thermal stability in the solid state, solubility in polar/nonpolar solvents and reversible electron/proton storage. Such versatility renders POMs of interest for academic and industrial applications, especially in catalysis. The contributions to this special issue on POMs provide an excellent overview of the current state of the subject, as well as providing updates to current reseach.

Qianyu Feng has won the Jacobs Dean’s Prize 2018 for the best Bachelor thesis in the focus area Health. She performed BSc research in the laboratory of Prof. U. Kortz and the title of her thesis is “Synthesis and Characterization of (a) Cubic Polyoxopalladate-Based Metal-Organic Framework and (b) Wheel-Shaped 27-Tungsto-3-Arsenate(III), [K(AsW8O30)3(WO(H2O))3]14-”. She is the coauthor of one publication: Selective Rb+ vs K+ Guest Incorporation in Wheel-Shaped 27-Tungsto-3-Arsenate(III) Host, [M⊂{(β-AsIIIW8O30)(WO(H2O))}3]14-(M = K, Rb), Kandasamy, B.; Sudmeier, T.; Ayass, W. W.; Lin, Z.; Feng, Q.; Bassil, B. S.; Kortz, U. Eur. J. Inorg. Chem. 2018. After graduation at Jacobs this summer Qianyu has now left Bremen in order to pursue graduate studies in Chemistry at ETH Zurich, Switzerland. 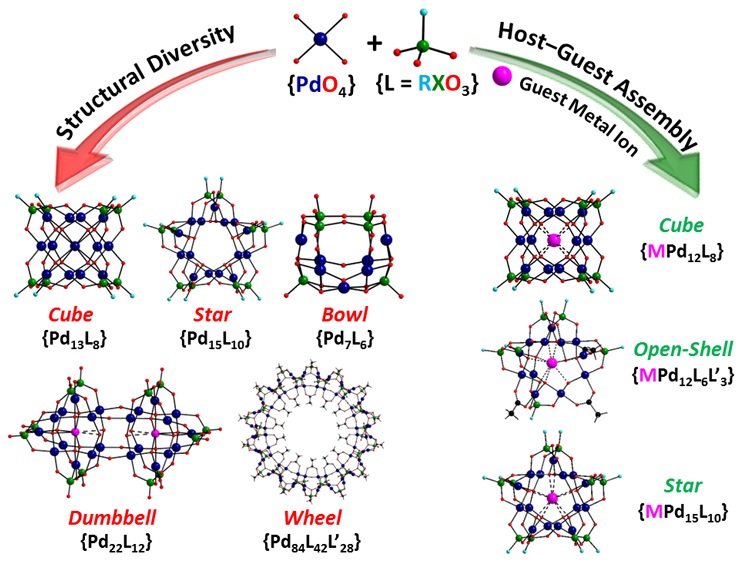 For her outstanding academic achievements in chemistry, Amna Rubab has been awarded the prestigious Hofmann Scholarship of the German Chemical Society (GDCh).

END_OF_DOCUMENT_TOKEN_TO_BE_REPLACED 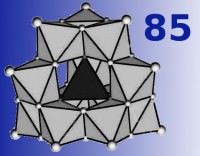 2018 marks the exciting 85th birthday celebration of the “Keggin structure”, which itself is at the center of polyoxometalate (POM) chemistry! The first polyoxoanions were reported almost two centuries ago by Berzelius (1826), but J. F. Keggin could only characterize them structurally in 1933 [1]. He solved the structure of the free acid H3PW12O40 using powder X-ray diffraction, a highly symmetrical metal-oxo anion with tetrahedral symmetry (see Fig. 1). The availability of X-ray diffraction techniques paved the way for the discovery of a large number of novel POMs with different shapes and sizes. Keggin is our POM pioneer!

She can perfectly recall the first days at her secondary school in her hometown of Bulawayo in Zimbabwe. Her physics teacher? A man. The mathematics teacher? A man. The biology teacher? A man. “But then this teacher walked into the classroom and I thought, ‘Wow, a woman who teaches chemistry!’” Nickolet Ncube recollected. “She got me fascinated in the subject, she inspired me, I wanted to be like her one day.”

END_OF_DOCUMENT_TOKEN_TO_BE_REPLACED

A scientific paper changed his life. He had not the slightest idea about Jacobs University, knew nothing about Bremen, and little about German culture and of course did not speak any German. However, while in Saudi Arabia, Wassim W. Ayass read a research paper on polyoxometalates by chemistry professor Ulrich Kortz, which propelled him to successfully apply to Jacobs University as a PhD student. Today, Ayass says: “I want to stay in Germany and build the rest of my life here”.

END_OF_DOCUMENT_TOKEN_TO_BE_REPLACED

She grew up in a small Indian village and was the first in her family to pursue university studies – Dr. Paulami Manna is now attending Jacobs University for one year. As a holder of a fellowship from the renowned Schlumberger Foundation, she conducts research as a post-doc in chemistry professor Ulrich Kortz’s working group. “The fellowship promotes top female talents from developing countries who return to their home countries after their studies abroad”, explains Prof. Kortz. “This is really great. I am very pleased that Paulami succeeded”.

END_OF_DOCUMENT_TOKEN_TO_BE_REPLACED

420 scientists from 78 countries participated and met around 30 Nobel laureates, attended their lectures, and had discussions with them. Inga was funded by the Verband der Chemischen Industrie (VCI) and Wassim was supported by the German Academic Exchange Service (DAAD) and co-funded by the OPEC Fund for International Development (OFID). Both Inga and Wassim are members of the research group of Prof. Ulrich Kortz at Jacobs University, performing research on synthetic inorganic materials chemistry and catalysis.

More info about the Lindau Nobel Laureate Meeting in this video:
http://mediatheque.lindau-nobel.org/videos/36833/opener 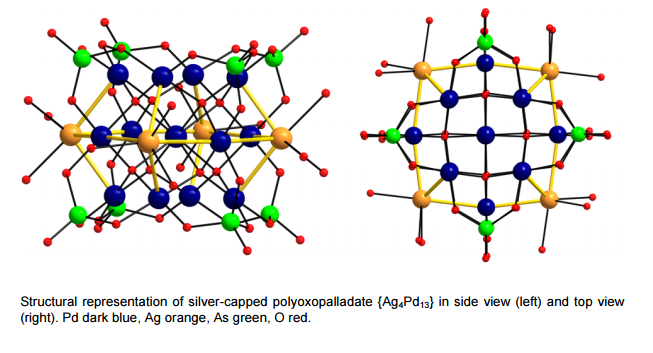 “You have to do things others have not yet done; combine chemicals that others have not yet combined; under conditions that have not yet been tried.” Ulrich Kortz sees himself as a passionate basic researcher. In 2008, the Chemistry Professor at Jacobs University in Bremen discovered a new class of compounds, the polyoxopalladates. Now the scientist and his team have developed another subclass of these functional materials. For the first time, they have combined two precious metals, palladium and silver, in a molecular metal-oxo assembly – with great benefits for science and industry.

END_OF_DOCUMENT_TOKEN_TO_BE_REPLACED

Too much manure, too much fertilizer: In many places in Germany, intensive agriculture is endangering water quality. The nitrate levels in groundwater are too high. A research team at Jacobs University led by the Chemistry Professor Ulrich Kortz has now discovered a new way in the lab to reduce nitrate contamination in water – with the help of so-called polyoxometalates, in short: POMs.

END_OF_DOCUMENT_TOKEN_TO_BE_REPLACED

Conventional fuel cells based on platinum catalysts are too expensive for widespread use. Cheaper systems, however, are significantly less efficient. An international research group including scientists from Jacobs University has now developed a novel catalyst, without platinum and with higher efficiency.

In the fight against climate change, fuel cells are one beacon of hope. They produce electricity from hydrogen and atmospheric oxygen. Instead of exhaust fumes, the only waste product is water. The required hydrogen can be produced sustainably,  for example by solar energy.

END_OF_DOCUMENT_TOKEN_TO_BE_REPLACED

Polyoxometalates (POMs) are a large class of discrete, soluble metal-oxo anions of early transition metals in high oxidation states, such as tungsten(VI) or molybdenum(VI). Due to a unique combination of properties, such as thermal and oxidative stability, tunability of acidity and redox activity, solubility in various media, and ability to undergo multistep multi-electron transfers without structural changes, POMs keep attracting more and more attention in different areas of fundamental and industrial science, in particular in homogeneous and heterogeneous catalysis.

END_OF_DOCUMENT_TOKEN_TO_BE_REPLACED 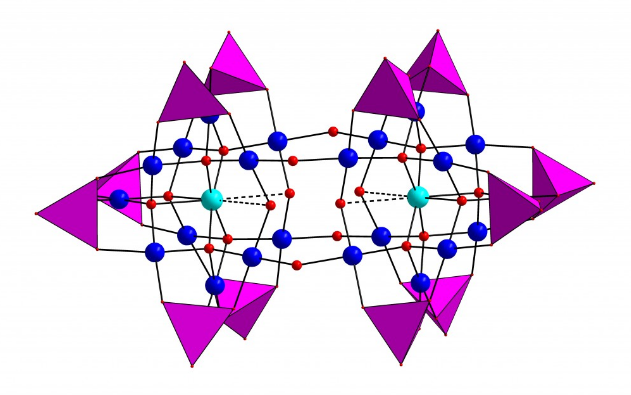 Ulrich Kortz, Professor of Chemistry at Jacobs University, and his team report the synthesis of a novel, discrete noble metal-oxide, containing a record number of 22 palladium atoms, as well as two central copper ions. In addition to its high catalytic potential, this {Cu2Pd22} cluster compound also exhibits very unusual intramolecular magnetic interactions. The study, which has now been published as a “Very Important Paper” in the Angewandte Chemie International Edition (DOI: 10.1002/anie.201006734), opens new perspectives for a better understanding of noble-metal particulate based oxidation catalysis as well as intramolecular magnetic phenomena of importance in materials and life sciences.

END_OF_DOCUMENT_TOKEN_TO_BE_REPLACED

Ulrich Kortz, Professor of Chemistry at Jacobs University, and his team successfully synthesized a polyoxometalate with 100 Tungsten and 20 Cerium atoms that has a molar mass of about 30 kilo Dalton. With a maximum diameter of 4.2 nm the inorganic molecule is comparable in size to large complex bio-molecules or even small viruses. The reaction conditions and the molecular structure are now published as cover story of the current issue of Angewandte Chemie (doi: 10.1002/anie.200701422).

[ Aug 08, 2007]  Polyoxometalates are anionic metal-oxygen clusters of large structural diversity with chemical properties, which make them especially interesting for applications in catalysis, but also in materials science and nanotechnology. Ulrich Kortz and his co-workers now achieved the synthethis of the tungstogermanate [Ce20Ge10W100O376(OH)4(H2O)30]56-, which belongs to the polyoxometalates, by condensation of the precursors [α-GeW9O34]10-and Cerium(III) ions in aqueous solution. With about 600 atoms in total, amongst them 100 atoms of the heavy metal Tungsten, the new compound is the third largest molecular polytungstate ever synthesized. In addition it contains the largest number of atoms of the Rare Earth Cerium ever incorporated in such a compound.