The class of polyoxometalates (POMs) historically comprises discrete, anionic metal-oxo clusters based on the early d block metal (addenda) ions VV, NbV, TaV, MoVI and WVI. As science has been probing deeper into the field of POM chemistry in recent decades, some unprecedented structural types and compositions have been discovered, accompanied by the requirement to redefine the concept of “POM” itself. This treatise is mainly directed at reviewing the main structural types of so-called “unconventional” POMs, where the addenda cover a range of elements across the periodic table.

Polyoxometalates in Biomedicine: Update and Overview 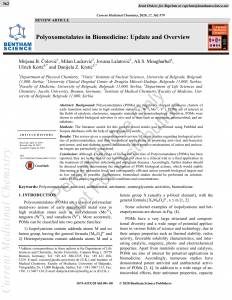 Background: Polyoxometalates (POMs) are negatively charged metal-oxo clusters of early transition metal ions in high oxidation states (e.g., WVI, MoVI, VV). POMs are of interest in the fields of catalysis, electronics, magnetic materials and nanotechnology. Moreover, POMs were shown to exhibit biological activities in vitro and in vivo, such as antitumor, antimicrobial, and antidiabetic.

Methods: The literature search for this peer-reviewed article was performed using PubMed and Scopus databases with the help of appropriate keywords.

Results: This review gives a comprehensive overview of recent studies regarding biological activities of polyoxometalates, and their biomedical applications as promising anti-viral, anti-bacterial, anti-tumor, and anti-diabetic agents. Additionally, their putative mechanisms of action and molecular targets are particularly considered.

Conclusion: Although a wide range of biological activities of Polyoxometalates (POMs) has been reported, they are to the best of our knowledge not close to a clinical trial or a final application in the treatment of diabetes or infectious and malignant diseases. Accordingly, further studies should be directed towards determining the mechanism of POM biological actions, which would enable fine-tuning at the molecular level, and consequently efficient action towards biological targets and as low toxicity as possible. Furthermore, biomedical studies should be performed on solutionstable POMs employing physiological conditions and concentrations.

Discovery and Evolution of Polyoxopalladates 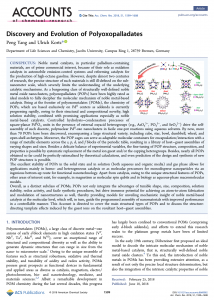 Noble metal catalysts, in particular palladium-containing materials, are of prime commercial interest, because of their role as oxidation catalysts in automobile emission-control systems and reforming catalysts for the production of high-octane gasoline. However, despite almost two centuries of research, the precise structure of such materials is still ill-defined on the sub-nanometer scale, which severely limits the understanding of the underlying catalytic mechanisms. As a burgeoning class of structurally well-defined noble metal oxide nanoclusters, polyoxopalladates (POPs) have been highly rated as ideal models to fully decipher the molecular mechanism of noble metal-based catalysis. Being at the frontier of polyoxometalates (POMs), the chemistry of POPs, which are based exclusively on PdII centers as addenda is currently progressing rapidly, owing to their structural and compositional novelty, high solution stability, combined with promising applications especially as noble metal-based catalysts. Controlled hydrolysis–condensation processes of square-planar PdIIO4 units in the presence of external oxyacid heterogroups (e.g., AsO43–, PO43–, and SeO32–) drive the self-assembly of such discrete, polynuclear PdII-oxo nanoclusters in facile one-pot reactions using aqueous solvents. By now, more than 70 POPs have been discovered, encompassing a large structural variety, including cube, star, bowl, dumbbell, wheel, and open-shell archetypes. Moreover, the POP cages can serve as adaptable molecular containers for encapsulation/interaction with a range of metallic elements across the s, p, d, and f blocks of the periodic table, resulting in a library of host–guest assemblies of varying shapes and sizes. Besides a delicate balance of experimental variables, the fine-tuning of POP structure, composition, and properties is possible by systematic replacement of the metal ion guest and/or the capping heterogroups. Besides, nearly all POPs obtained so far could be perfectly rationalized by theoretical calculations, and even prediction of the design and synthesis of new POP structures is possible.

The excellent stability of POPs in the solid state and in solution (both aqueous and organic media) and gas phase allows for applications mainly in homo- and heterogeneous catalysis or as molecular precursors for monodisperse nanoparticles via an ingenious bottom-up route for functional nanotechnology. Apart from catalysis, owing to the unique structural features of POPs, other areas of interest exist, for example, in magnetism as molecular spin qubits and in biology as aqueous-phase macromolecular models.

Overall, as a distinct subclass of POMs, POPs not only integrate the advantages of tunable shape, size, composition, solution stability, redox activity, and facile synthetic procedures, but drive immense potential for achieving an atom-to-atom fabrication and modulation of nanostructures as well, thereby providing models for unveiling mechanistic insight of noble metal-based catalysis at the molecular level, which will, in turn, guide the programmed assembly of nanomaterials with improved performance in a controllable manner. This Account is directed to cover the main structural types of POPs and to discuss the structure-directing template effects induced by the guest ions on the resultant host–guest assemblies. 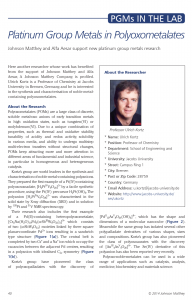 Polyoxometalates (POMs) are a large class of discrete, soluble metal-oxo anions of early transition metals in high oxidation states, such as tungsten(VI) or molybdenum(VI). Due to a unique combination of properties, such as thermal and oxidative stability, tunability of acidity and redox activity, solubility in various media, and ability to undergo multistep multi-electron transfers without structural changes, POMs keep attracting more and more attention in different areas of fundamental and industrial science, in particular in homogeneous and heterogeneous catalysis.

Kortz’s group are world leaders in the synthesis and characterisation of noble metal-containing polyanions. They prepared the first example of a Pt(IV)-containing polyoxovanadate, [H2PtIVV9O28]5- by a facile synthetic procedure, using the Pt(IV) precursor H2Pt(OH)6. The polyanion [H2PtIVV9O28]5- was characterised in the solid state by X-ray diffraction (XRD) and in solution by 195Pt and 51V NMR spectroscopy. 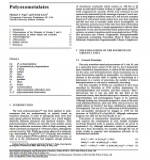 The term polyoxometalate has been applied to polyoxoanions that are predominantly or entirely based on transition elements, in order to distinguish them from their main group relatives (borates, silicates, etc.) which display distinctly different structural and chemical features. Thus polyoxometalates (POMs) are typically water-soluble anions that adopt molecular structures, often of high symmetry, and which commonly incorporate 5–50 metal centers, although the current record is 368. 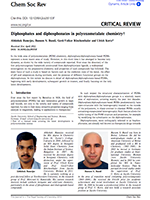 In the wide area of polyoxometalate (POM) chemistry, diphosphate/diphosphonate-based POMs represent a more recent area of study. However, in this short time it has emerged to become very dynamic, as shown by the wide variety of compounds reported. Ever since the discovery of the first polyoxotungstate framework constructed from diphosph(on)ate ligands, a widespread investigation on the preparative chemistry and properties of such compounds has followed. The main focus of such a study is based on factors such as the oxidation state of the metal, the effect of pH and temperature during synthesis, and the presence of different functional groups on the diphosphonate. In this review we discuss in detail all diphosphate/diphosphonate-based POMs, beginning with early developments, subsequent growth in interest, and finally focusing on the very latest developments. 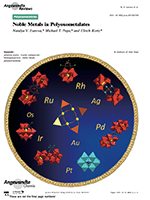 Polyoxometalates containing noble metal ions, such as ruthenium, osmium, rhodium, palladium, platinum, silver and gold, are a struc- turally diverse class of compounds. They include both classical heteropolyanions (vanadates, molybdates, tungstates) in which noble metals are present as heteroatoms, as well as the recently discovered class of polyoxometalates with noble metal “addenda” atoms. The focus of this Review is on complexes that should, in principle, exist as discrete molecular species in solution, and which are therefore of interest for their reactivity, their future synthetic utility and potential applications, for example, in catalysis or nanoscience.

The dilacunary, Keggin-based gamma-decatungstate ions [γ-XW10O36]8− (X = Si, Ge) {XW10} exhibit an exciting and versatile solution chemistry, which is probably unmatched by any other lacunary polytungstate. The reactivity of {XW10} in the presence, and even absence, of electrophiles, includes loss/gain of tungsten, isomerization, and dimerization. Ever since the syntheses and structures of {XW10} were reported, many research groups around the world have investigated the reactivity of these polyanions towards nucleophiles (mostly d-block metal ions) and different products with various shape, size and composition were obtained. Here we provide an overview of the state-of-the-art in this subarea of polyoxometalate chemistry, with a focus on synthetic and structural aspects.

The area of lanthanide-containing polyoxometalates has been a field of large interest for several years due to the interesting structural and physicochemical properties of such compounds. This chemistry is dominated by tungsten based POMs, as a large number of vacant (lacunary) polytungstate precursors is known (as opposed to vanadium or molybdenum based POMs). The main subclasses in this field are lanthanide-containing iso– and hetero-polytungstates. The number of examples in the latter class is significantly larger than the former, probably because more lacunary hetero– than iso-polytungstates are known. Here we report on recent examples of lanthanide-containing iso– and hetero-polytungstates with a focus on synthetic and in particular structural aspects. The compounds discussed include discrete molecular species as well as 1-, 2- and 3-D solid-state assemblies. 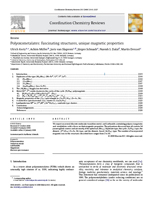 We report on several discrete molecular transition metal- and lanthanide-containing polyoxo-tungstates and -molybdates with a focus on their magnetic properties. The polyanions discussed here all contain 3d paramagnetic centers and are mostly of the spherical {Mo132} Keplerate type, the cyclic {P8W48} type, the dimeric {XIII2W18} (X = As, Sb) type, and the dimeric, fused {Si2W18} type. The number of incorporated magnetic ions in the structures described here ranges from 3 to 30.